Club members - Let our club president know if you would like to propose a visitation to another club and be in charge of organizing it. Sometimes we carpool. Get 8 dancers to go and we can get a banner from another club and bring it home. (That encourages them to come visit our club to get the banner back.) All you need is a sign-up sheet and make an announcement at a couple of dances beforehand. Then let the club we are visiting know we are coming and how many to expect. Voila!

If you've got it, wear your green and white on these official visitations.

We have an upcoming visitation to Sweet Home Squarenaders' Turkey Dance Nov. 9, 2019.  Join the Whirl-A-Ways who also plan to visit that night.   The turkey dinner at 6:30 is always a real treat!  Jim Hattrick will be calling and Jackie Gale cueing.

March 4th, 2017 -  Was a visitation to the Independence Wagon Wheelers who dance in Rickreal at the Polk County Fairgrounds. George Hermann called and Ralph Lambert cued.  It is always a huge amount of fun to dance with the IWW to George’s calling and this was no exception.

April 1st, 2017 - The Buckeroo Birthday Dance at the Buckeroo Barn in Roseburg with Mike Sikorsky calling was a terrific dance. We didn't get our banner back as it was a birthday dance, but we didn't want to miss the opportunity to support them,  a tradition over the years.


October 31st, 2015 was the CCCA Halloween dance! It was an official Single Trees visitation on Saturday night at the hall. Lots of Single Trees were in attendance and the costumes were pretty good.

April 4, 2015 Single Trees visited the Buckeroos in Roseburg. They celebrated their 63rd birthday with Dale Roberson and Don Marshall calling (the Umpqua Boys). Neil Koozer did the cueing.

March 28, 2015 was the Cascade Callers and Cuers Association - CCCA Dance at the hall. There was a silent auction with donated items.  The callers and cures also donated their time and all the money raised went to the South Williamette Honor Flight fund. It was a good dance for a good cause.

December 20, 2014 was Whirl-A-Ways and Danebo Circle 8 combined Christmas dance and we went on a visitation. Roger Putzler and Mike Kious called, and Christine Corelli did the cueing. Fun was had by all.

November 8, 2014 was the Squarendars Turkey Dance with Jim Hattrick calling and Jackie Gale cueing. Dinner and a dance - it is always a terrific feed and fun dance and lots of people went.

On October 25, 2014 our club had scheduled a visitation to the Corvallis Squares Halloween Dance. Then it changed to a go-on-your-own "visitation." Jim Voll called and Jackie Gale cued. Have to ask around to see who showed up! 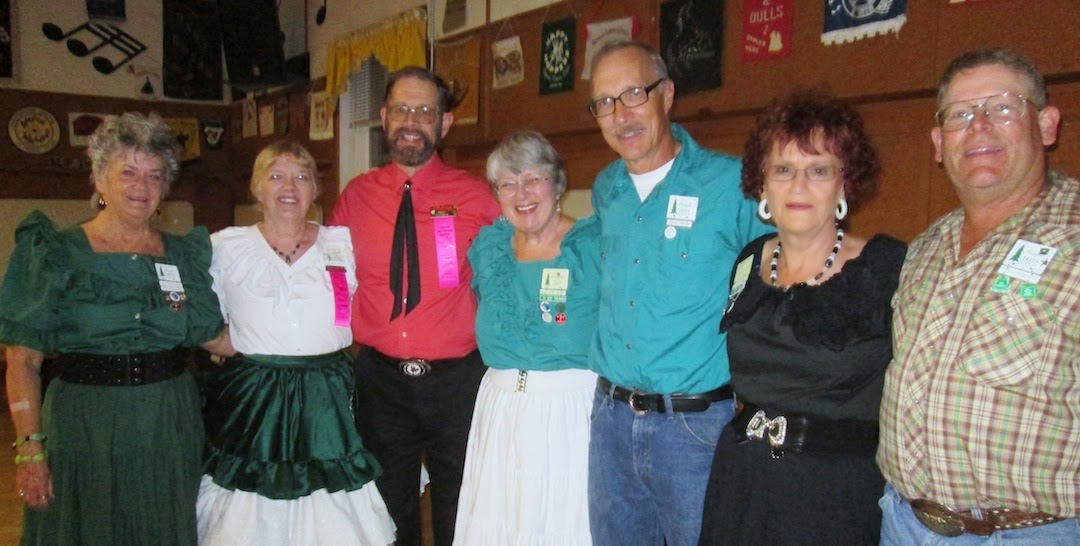 September 20, 2014 - Single Trees made a visitation to the Oregon State Federation special dance which featured Leonard Snodgrass and Jackie Gale at the Salem Square Dance Center.

March 29, 2014 - Single Trees' visitation was to the Area Benefit dance, "Wounded Warriors Housing Project," with silent auction, Cascade Callers & Cuers donated their time. Thanks everyone for supporting this benefit dance.