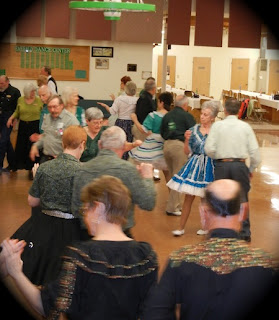 Our guest caller was Mike Halley, on March 9th for our Saint Patricks dance called "The Wearing of the Green" I saw quite a bit of green that night.  It was a fun dance and the baked potato feed was also a hit. See us all whirling and twirling to some foot-stomping music. (right)


About Mike Halley:  He began square dancing in 2000 and in 2007 he was calling. He participated in caller schools and seminars with Daryl Clendenin,  Wade Drive, and Deborah Carroll-Jones.  He is also a member of the "WildCards with his brother Terry Halley and his friend K.C. Curtis. The trio has called many dances including the "Seaside Sashay" square dance festival. Last May he and his wife Helen were hired as caller and cuer for the Oaky Doaks Square and Round Dance Club in Oak Grove, Oregon.  He enjoys calling for the club and still makes guest caller appearances, at our club, for example. He just keeps getting better. 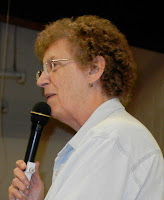 The dance started with Plus Squares at 7:30 and then Pat Hintz (left) started cueing round dance with a couple of dances at 8:00, followed by mainstream and the pattern continued until 9:15 or so with a break for that baked potato feed.  We didn't polish off all the potatoes, so some went home with our guest dancers for a nice weekend breakfast.

Sandy Harris (right) showed up that night and did a guest tip calling some fun square dance moves.  It is nice to mix it up a bit.  We'll have to ask her to call for us in the future when we work up a new roster of dances and callers.
Posted by Single Trees at 9:48 PM

Tess Freeman made a wonderful video she wanted to share with us. You might remember her doing videography a few weeks ago. Enjoy! Just click on the link below.  It is called "A Lifetime of Do-Si-Does" and says a lot about what makes square dancing fun. The video features Larry Lauderdale.