As you all know, Scott is an excellent caller and we really are thrilled that he will be calling for us again at the Single Tree's hosted New Year's Eve Dance to ring in the new year.   To keep you going to midnight, a buffet gourmet sandwich bar with fruit and desserts will be available as well as some bubbly to toast in the new year.  Round dancing with our cuer Pat Hintz starts at 8 pm with intermediate rounds followed by regular rounds at 8:30 pm.  At 9 pm Zinser will call mainstream with every third tip plus until a bit after midnight. Join us for a fun evening.

Scott is a "regular" on the circuit of clubs in neighboring Oregon and southern Washington cities. He has called for clubs in Tacoma, Vancouver, Salem, Eugene/Springfield, Roseburg, Grants Pass, Medford, Redmond, Bend, Prineville, Coos Bay, Port Orford, Toledo, Rickreall, Seaside, and Yreka. He travels from 8,000 to 9,000 miles per year around Oregon to dances. 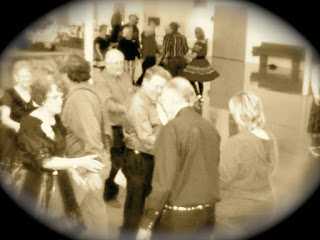 Scott has been on the program at Oregon's Summer Festival and Mid-Winter Festival for many years. He also attends and calls at Central Oregon Round-up each year. Besides all that, he has been the caller on a number of parade floats in Oregon, including General Canby Days in Canby, the Rose Festival Star-Light Parade in Portland, and the Grape Festival in Milwaukie. And, he was also the caller for "International Showcase of Dancing" held in Portland each year for several years.

For more information on Scott, go to: this link.  Thanks to Scott for this information about his calling background.
Posted by Single Trees at 10:27 AM 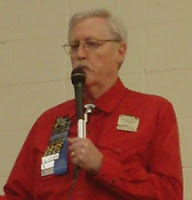 George Hermann returned to call for us on December 14th for our Christmas Holiday Dance and potluck.  Hermann hails from the Portland area and has been calling for more than 26 years.  He kept us moving all night and on our toes for sure.

And of course, our round dance cuer, Pat Hintz, got us spinning and twirling, dancing the two-step, waltz, fox trot, cha-cha, and jive. The potluck dinner at 6:30 was a big hit and the desserts were yummy. The hall decorations put us in a festive mood.

And we had a BIG visitation from the Independence Wagon Wheelers Square Dance Club. They dance in Rickreal at the Polk County Fairgrounds. Thank you for adding to our festive evening.
Posted by Single Trees at 11:30 AM

Single Trees
Springfield, Oregon
We are a fun-loving bunch of square dancers. All dancers, singles or couples, are welcome at any Single Trees dance. It is never necessary to have a partner to attend a Single Trees function. Our minimum age to join is 18. Children under that age are welcome who can mainstream dance if accompanied by a parent. Children older than 10 who wish to learn are encouraged to come with a parent to take lessons. Guests from other clubs are always welcome at our dances.